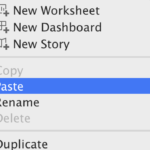 A small tip for a situation that is occurring once in a while to me (probably Mac specific):

If you have been working on a Tableau dashboard for quite a while, you suddenly can’t save the workbook anymore. ‘Save’ results in a popup which disappears very quickly, and ‘Save as’ shows the ‘save as’ dialog for a few milliseconds before disappearing again. Odd behavior – but especially annoying because you really want to save the changes you have made in the last two hours…

END_OF_DOCUMENT_TOKEN_TO_BE_REPLACED

Female actors are getting more important in movies. In 2016 we had Jyn as the most important Star Wars character on the Rogue One posters, Harley Quinn was the leader of the Suicide Squad according to the posters and Black WIdow seemed to be one of the most important character in the Marvel universe.

But the space female actors were given on the the posters are definitely not in line with the time they were allowed to speak. Only Dory was able to chat her way throughout the movie.